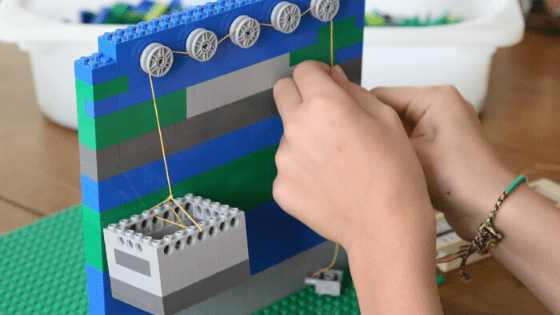 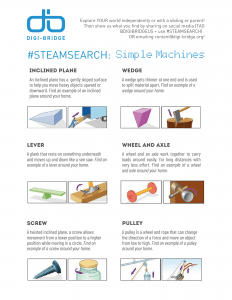 Our STEAM-based scavenger hunt called a #STEAMSearch is a fun way to learn new things or learn more about topics you and your scholar may already be interested in.

This week’s #STEAMSearch is all about simple machines! Learn what they are and see if you can find and/or build them!

BONUS! Pretend that you are standing outside holding a heavy box while looking up at a window that is about eight feet off the ground. Your job is to get the heavy box into the window. How are you going to do this? Throw the box into the air and cross your fingers? Lift the box above your head and stand on your tippy toes? This is when an inclined plane would come in handy. What if there was a ramp that went from the ground to the window? You could simply push the box (also known as the load) up the ramp! Construct an inclined plane OR watch this video to learn more!
DIGI-KNOW? An inclined plane involves more distance than a straight route. For example, a ramp for your dog is probably much longer than a ladder to a treehouse.

A wedge gets thinner at one end and is used to split material apart. Find an example of a wedge around your home.

BONUS! Try dragging a plain rectangle block vs. a triangle block through dirt or sand. Which is easier? Watch this video to understand why. 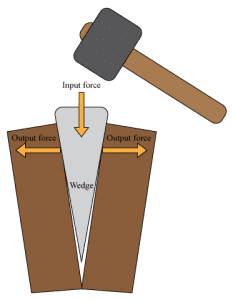 A plank that rests on something underneath and moves up and down like a see saw.  Find an example of a lever around your home.

Can you try this math problem to balance the load on a seesaw?

Aaron is sitting on one end of the seesaw and weighs 30 lbs. and is 4 feet away from the center.  His younger sister Nia weighs 20 lbs, how far does she need to sit from the center to balance the seesaw?

A wheel and an axle work together to carry loads around easily, for long distances with very less effort. Find an example of a wheel and axle around your home.

BONUS! Put something heavy like a brick (or sibling!) on a board. Try to push the board across the floor. Then, put the board on top of a scooter or skateboard. Is it easier to push now?
DIGI-KNOW? When you try to push a load across the ground, there’s a lot of friction that makes it hard to move because the entire surface area is on the ground. When you put the load on wheels, then there’s only friction on the very small part of the wheel that is touching the ground at any given time. That makes it much easier to move a heavy load over a long distance.

A twisted inclined plane, a screw allows movement from a lower position to a higher position while moving in a circle. Find an example of a screw  around your home.

BONUS! Check out these examples and activities to explore a screw simple machine.
DIGI-KNOW?  Archimedes’ Screw (water screw) has been used to lift water to higher levels since ancient times. Archimedes (287-212 B.C.) is the traditional inventor of this device, which was originally used for irrigation in the Nile delta and for pumping out ships. Learn more about what this simple machine does.

A pulley is a wheel and rope that can change the direction of a force and move an object from low to high.  Find an example of a pulley  around your home.

BONUS! Demonstrate a pulley! Tie a rope on something heavy like a big book, a gallon of milk, or a container of laundry detergent. Pull up on the rope and notice how heavy it is to lift the object. NOW – loop the string over a doorknob or railing and pull down on the rope to lift the object up off the ground. It should be a lot easier!
DIGI-KNOW? The key point of pulleys is that they redirect force. For example, instead of PUSHING a load UP, you can attach it to a rope and pulley above you and PULL DOWN. All pulley systems redirect force.

We encourage you to show us what your students find by sharing with us on social media (tag @DIGIBRIDGEUS and use #STEAMSEARCH) OR you can email: content@digi-bridge.org!

This past month, Digi-Bridge partnered with CodeNinjas Concord and Dottie Rose Foundation to make that statement a reality in the Charlotte area. Together, we hosted SheCanCode, three weeks of STEAM programming for female STEAM scholars.

6 At-Home Science Experiments You Need to Try This Summer

These at-home science experiments will bring the STEAM to your summer break.

At the recent Digi-Bridge Robotics Showcase, middle school students participated in a robotics competition and learned about STEAM opportunities for high school and beyond.

Get Updates and Stay Connected -Subscribe to Our Newsletter

Digi-Bridge aims to equip shareholders with the means to foster optimal use of technology in the learning environment, ensuring that all 21st century learners have opportunities to succeed in the digital age. We’ve been doing work in Charlotte since 2014 with a strong team of efficient and passionate people. 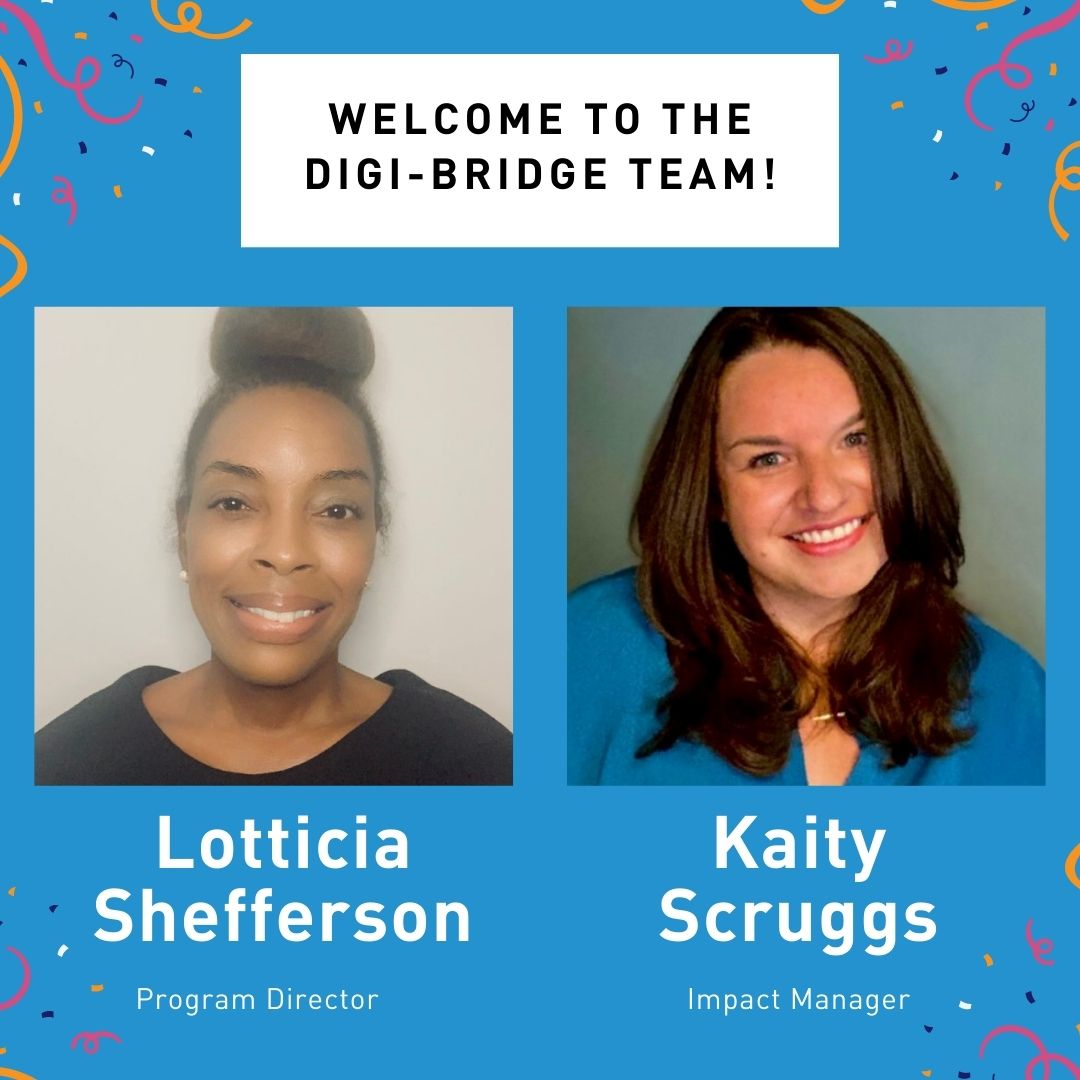 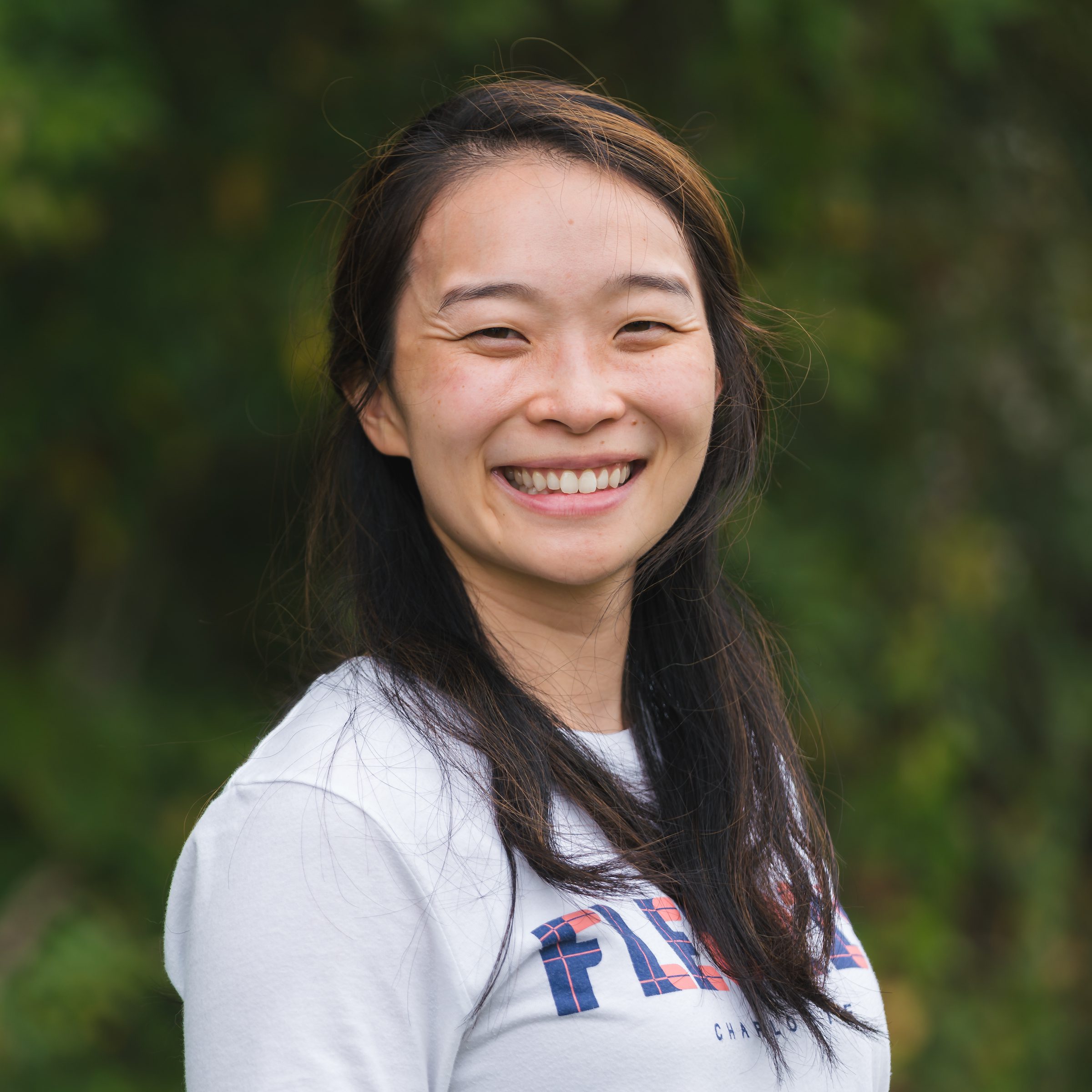